Being situated in the land between Gokarna and Kanyakumari, believed to have been established by the sage Parashurama. The main deity of the temple is the swayambhu (self-born) jyotirlinga with a golden line cutting it to half, of which the left half is Tridevis, and the right half is Trimurtis.Along with this, there is also a four-handed panchaloha statue of the goddess Mookambika. Rathotsava in the month of Phalguna and Navaratri in the month of Ashwina are the main festivals of this Kollur Mookambika Temple.

It is assumed that Adi Shankaracharya had a vision of Sri Mookambika Devi and had installed the deity here. One day, Devi appeared before Adi Shankarachary asking for his wish. He announced his desire to install the Devi idol in a place to worship in Kerala.Devi agreed, but put forward a condition that she follow Shankara, and he should not look back until he reaches his destination. But to test Shankara, Devi purposely stopped the noise of her anklets when they entered Kollur, and then Shankara turned and looked back because of doubt.

Devi then asked Shankara to mount her vigraha in Kollur. The original temple where Shankara meditated and Devi appeared before him is the Kodachadri peak (1343 mt) which is at a distance of about 21 km from Kollur, also visible as a large mountain peak from Kollur Sri Mookambika Temple.

Kollur Mookambika Temple in Which District

Lodging arrangements have been made for the convenience of the devotees visiting the Temple Authorities. Super Deluxe Lodges, Air Conditioned Lodges, Non-Air Conditioned Lodges and ordinary dormitory rooms are provided with a nominal charge. Mookambika Temple  Guest House Non – A/C Starts from Rs. 250 and A/C Rooms starts from 500.

Men are expected to take off all their upper clothes and to wear a white dhoti with an upper body either bare or covered with a white kurta in order to enter the garbhagriha of the temple.

The regulations are tighter for women who are not permitted to wear skirts or western clothes at all. They must be wearing a saree with a blouse or a Kurta with a Punjabi and a dupatta. Previously, even churidars were not permitted inside the temple premises, and women had to wear a dhoti over the churidar or a half saree to get inside for darshan.

The Devotees visiting the Temple are given free Lunch and Dinner in the form of “Prasadam.” 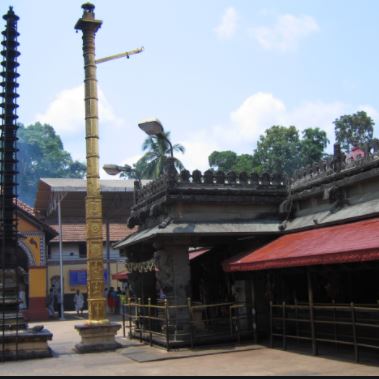