Sri Talupulamma Temple(Talupulamma Lova Temple) is located in the village of Lova in Tuni Mandal in East Godavari. It’s situated on a hillock between Darakonda and Teegakonda. It’s pretty dangerous for the pilgrims. It is also believed that this hillock is frequented by the goddess Sri Talupulamma Talli at night. While there is a mild rush of pilgrims here, one can find quite a rush on Sundays, Tuesdays and Thursdays.

Truck owners as well as car owners, particularly those living in the Godavari and North Coastal Districts, share a special bond with this Talupulamma Lova Temple because they strongly believe that Goddess Talupulamma Talli will protect them from accidents, hazards and will also help to make profits. Devotees remain at the foot of the Temple Hillock and perform pooja on their car.

Legend has it that the great Sage Agastya was so enchanted and charmed by the scenic splendour and tranquilly of this place that he settled down here and meditated. It is believed that he used to eat fruit and drink water from these mountains. These mountains were named “Darakonda and Teegakonda” respectively.Talupulamma Talli is considered to be a “Swayambhu” (self-incarnate). It’s named Talupulamma Talli, since the “simple thinking” (thalapu) of her is enough for the goddess to offer benevolence to her devotees.

To enter this Talupulamma Lova Temple, one must climb a long and steep flight of steps starting from the ornate entrance that leads to the sanctuary of the goddess Talupulamma Talli. While ascending these long and steep steps, the devotees pause for a few minutes at the intermediate landing, where they worship Lord Sri Kailasa Ganapathi and the other deities present there.

The devotees who come here prepare their food (Prasadam), give it to the goddess, have the prasadam and then leave the premises after worshipping the deity. 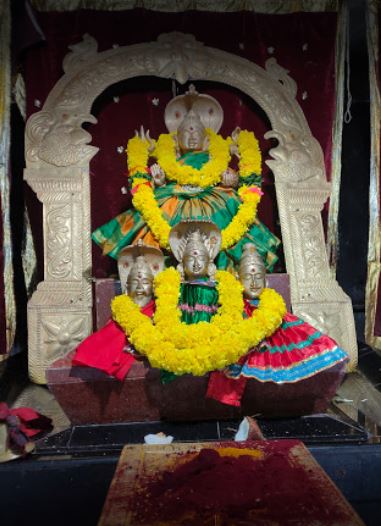