This lakshmi narasimha konda was constructed in the 9th century by the pallava king Narasimha Varma, according to the Rocks sculpture. In  Narasimha Konda Temple Nellore  there are seven sacred Gundam’s (Koneru) that are refurbished on Narasimha Konda with Mandapas. According to mythology, wings were blessed in the very distant past hills and they traveled freely from one location to another.

Once the Malayagiri Mountain traveled from Kanyakumari to the Himalayas, its four wings dropped at various places on earth, namely Vedagiri, Yadagiri, Mangalagiri, and Nandagiri. Goddess here in Vedagiri is called as Chench Lakshmi by Prahladhopakyanam narasimha Swamy (Nrusimha swamy) married Chench Lakshmi by rock inscription This temple was constructed by one of the king’s pallavs and its name is Narasimha Varma in the 9th century.

It is thought that according to Brahma Puranam on this location the Kasyapa rishi (sage) together with another 7 sage named as saptharishi conducted 7 Yagna’s on this mountain Lord Narasimha Swamy appeared after this Yagnam, it is also thought that the swamy Lord Venkateswara set his foot on this mountain.

It was also mentioned in Ramayanam (Aranya Kanda) as sri Rama was visited as part of his stay. Caves here are called ‘ Caves of Ashwatthama.  It is said that Ashwatthaama was cursed by Lord Krishna for murdering Draupadi’s sons on Mahabharata’s battlefield.

The temple of Vedagiri is only 15 km from the bus station in Nellore. There are direct buses from all main South India towns such as Hyderabad, Tirupati, Ananthapur, Bangalore, and Chennai to Nellore city. 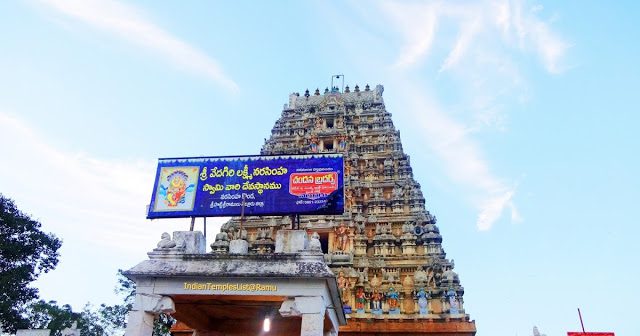