The Temple of Sri Veeranjaneya or Gandi Kshetram is a Hindu temple located in Gandi, India’s Kadapa District of Andhra Pradesh. Lord Anjaneya(Hanuman), who is referred to in this temple as Veeranjaneya, is devoted to the temple.

The history of Kshetram dates back to Treta Yuga, the time of the Ramayana. According to the legend, while resting at this spot, Lord Rama himself drew the image of Lord Hanuman on the rock with his arrow, and received the hospitality of Lord Vayuu (God of Air and Father of Lord Hanuman).

This temple is known as the Temple of Abhayahasta Anjaneya and is situated on the banks of the Papaghni River. Gandi implies a narrow passage in the Telugu language for the water to flow out. This place seems to be a small passage between the hills of the Eastern Ghats for the river to flood. This place is situated in the district of Kadapa, 34 km away from the town of Pulivendula. 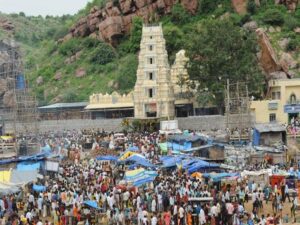 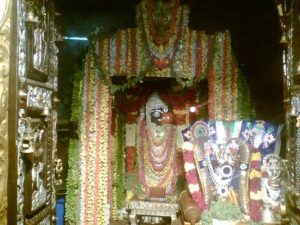 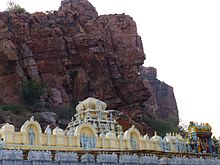