Brihadeeswarar temple, also known as Rajarajeswaram or Peruvudaiyr Kovil, is a Hindu temple dedicated to Shiva in Thanjavur, Tamil Nadu, India. It is situated on the south bank of the Kaveri River. Brihadisvara Temple is one of the largest temples in South India and a model of completely realized Tamil architecture. Dhakshina Meru is the name given to it (Meru of south). Built between 1003 and 1010 AD by Tamil king Raja Raja Chola I, the Brihadisvara Temple is part of the UNESCO World Heritage Site known as the “Great Living Chola Temples,” which also includes the Chola dynasty period Gangaikonda Cholapuram temple and Airavatesvara temple, which are 70 kilometers (43 miles) and 40 kilometers (25 miles) northeast, respectively. 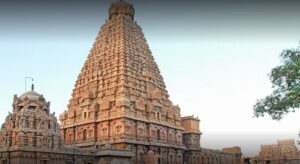 From the 5th to the 9th century, a range of Hindu temple styles developed under the Chalukya era’s rule, as seen in Aihole, Badami, and Pattadakal, and then under the Pallava era’s rule, as seen in Mamallapuram and other monuments. Following that, between 850 and 1280 CE, the Cholas were the ruling dynasty. During the early Chola period, the focus was more on securing geopolitical boundaries and less on architecture. Within the Chola empire in the 10th century, features such as multifaceted columns with projecting square capitals appeared. According to George Michell, this marked the beginning of the modern Chola style. The Brihadeeswarar temple, constructed between 1003 and 1010 by Chola king Rajaraja I, is the best example of this South Indian style in terms of scale and detail. 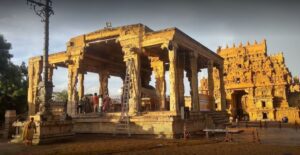 The axial and symmetrical geometry principles are used in the design and construction of the Peruvudaiyar Temple . Perunkoil (also known as Madakkoil) is a large temple constructed on a higher platform of natural or man-made mounds. The temple complex is almost two stacked squares in size, measuring 240.79 meters east to west and 121.92 meters (400.0 feet) north to south. The sanctum with the towering superstructure (sri vimana), the Nandi hall in front (Nandi-mandapam), and the main community hall (mukhamandapam), the great gathering hall (mahamandapam), and the pavilion that connects the great hall with the sanctum are the five main parts in this room (ardhamandapam).

By adopting architectural and decorative elements, the Peruvudaiyar temple continued the Hindu temple practices of South India, but its size far outstripped that of temples built before the 11th century. The Chola era architects and artisans developed the expertise to scale up and construct, especially with heavy stone, to achieve the towering vimana’s height of 63.4 meters (208 feet). 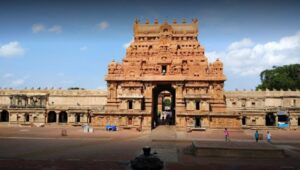 This courtyard contains the main temple-related monuments as well as the great tower. Smaller shrines, the majority of which are aligned axially, surround the main Shiva temple. These are dedicated to his consort Parvati, his sons Subrahmanya and Ganesha, Nandi, Varahi, Karuvur deva (Rajaraja Chola’s guru), Chandeshvara, and Nataraja, among others. A monolithic seated bull faces the sanctum in the Nandi mandapam. Between them are stairs that lead to a columned porch and community gathering hall, followed by an inner mandapa that connects to the pradakshina patha, or circumambulation path. The mukh-Nandi mandapam’s (bull) weighs about 25 tonnes.It stands about 2 meters tall, 6 meters long, and 2.5 meters wide and is made of a single stone. Nandi’s image is monolithic and one of the most popular in the world.

What is the fastest way to get to Brihadisvara Temple?

Via Air : The international airport of Tiruchirapalli is 61 kilometers away.

Via Rail: There is a direct train from Chennai Central to Thanjavur.

Via Road : Temple is 382 kilometers away from Chennai.

The airport is about a one-hour drive from Tiruchirapalli.

There is a direct bus from Chennai CMBT to Thanjavur. 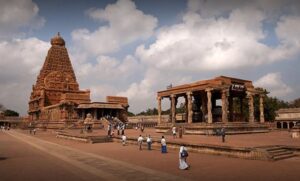