The Sri Ranganathaswamy Temple Srirangam is a Hindu temple in Srirangam, Tiruchirapalli, Tamil Nadu, India, dedicated to Ranganatha, a form of the Supreme God Maha Vishnu. The Sri Ranganathaswamy Srirangam temple, built in the Dravidian architectural style, is praised by Alvars in their Divya Prabhanda and holds the distinction of being the first of the 108 Vishnu Divya Desams.

The Location Srirangapatna was originally known as Srirangapuri, but it was later renamed Srirangapatna. The river Cauvery surrounds the town, which makes it an island. Srirangam Sri Ranganathaswamy temple is located in this city. Other small temples include Sri Lakshmi Narasimha, Sri Gangadereshwara, Sri Jyothi Maheshwara, and others. Sri Ranganatha is the most significant of them all. In the year 894 CE, a lady named Hambi, of the dancers’ class, designed the inner apartment of Sri Ranganatha temple. 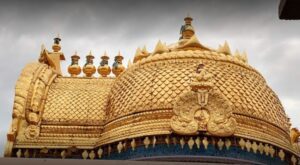 The Ranganathaswamy Temple Srirangam is India’s largest temple complex and one of the world’s largest religious complexes. As a living temple, some of these buildings have been restored, extended, and reconstructed over the years. The outer tower, which stands 67 meters (220 feet) tall and was completed in 1987, is the most recent addition. Srirangam Sri Ranganathaswamy temple is often referred to as one of the world’s largest operating Hindu temples, with Angkor Wat being the largest extant temple.The temple is a functioning Hindu temple that practices Sri Vaishnavism’s Thenkalai tradition. A million people attend the annual 21-day festival held during the Tamil month of Margazhi (December–January). The temple complex has been nominated for UNESCO World Heritage status and is on the organization’s tentative list.

Numerous Tamil legends about the temple and its artwork can be found in regional Puranic texts. For example, Sriranga Mahathmiyam is a set of temple mythology about its origins. Brahma, according to legend, was performing austerities during the samudra manthan, and as a result, Srirangam Vimanam was born. It was brought to Ayodhya by king Ikshvaku after spending a long time in Satyaloka. After killing the evil demon Ravana, Rama, a Vishnu Avatar, gave it to King Vibhishana, who desired to be with Rama.The Srirangam Vimanam did not leave the island when Vibhishana passed through Trichy on his way to Sri Lanka, where he had become king. So he gave it to Dharma Varma, a local king, on the condition that the king consecrated the Vimanam to eternally face the south cardinal direction, blessing him and Lanka. As a result, the deity (reclining) faces south, his body aligned with the east-west axis. 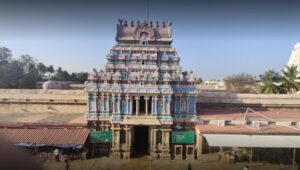 Sanaka, the four child sages, came to Srirangam for a darshana of Ranganatha, according to another legend. The guardians of Vaikuntha, Jaya and Vijaya, intervened. Despite their pleadings, they were denied admission. They cursed the guardians in unison and stormed away, enraged. Vishnu was confronted by the guardians, who informed him of the curse. Ranganatha said he wouldn’t be able to reverse the curse and offered them two options: three births as demons resisting Vishnu or seven births as decent human beings.The guardians embraced the position of demons in order to return to the Lord and are thought to have taken the forms of Hiranyaksha and Hiranyakasipu, Ravana and Kumbakarna, and Sisupala and Dantavakra. Varaha, Narasimha, Rama, and Krishna were Vishnu’s four avatars who killed the demons in each of those births.

No Darshan after 21.00 at Sanctum Sanctorum

General Entrance – in All Seva timings

Throughout the year, the temple hosts a variety of festivals, including processions. These are known as utsavam (celebrations).

Ranganathaswamy Temple Srirangam Dress Code :  The  Srirangam temple has strict dress guidelines. Devotees are not permitted to enter the temple wearing provocative or revealing clothing in any way. Tank tops, sleeveless dresses, shorts, and skirts are among the attire forbidden at this temple. To enter the temple, visitors are advised to dress in traditional Indian attire or wear a scarf. Certain parts of the temple have entry restrictions, and it should be remembered that the sanctum sanctorum is only open to priests. The general public is not authorized to enter the Lord’s main idol. 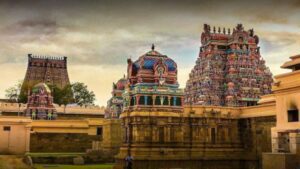 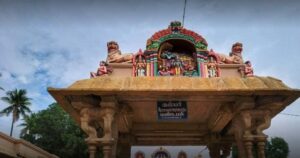 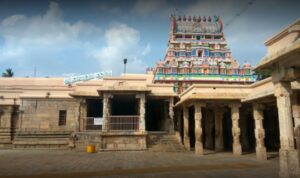