Benjamin Lewis Rice describes a legend surrounding the temple’s consecration in the “Gazetter of Mysore” (1887). Kempe Gowda rode far away from his capital, Yalahanka, while on a hunt. He fell asleep under a tree because he was tired. In a dream, the local deity Someshwara appeared to him and ordered him to build a temple in his honor out of buried treasure. The chieftain would gain divine favor in exchange. Kempe Gowda discovered the treasure and faithfully built the temple. 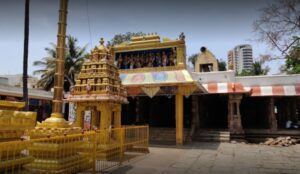 The temple plan, according to Michell, combines many of the basic elements of Vijayanagara architecture, but on a smaller scale. A square sanctum (garbhagriha) is surrounded by a narrow passageway in the temple. The sanctum is linked to a closed mantapa (hall) with pilasters and frieze sculptures on the walls. A spacious open mantapa with four wide projecting “bays” connects the closed mantapa (area between four pillars). The traditional Yali (mythical beast) pillars are those leading to the sanctum and those facing outward from the open mantapa. The eastern gopuram is a finely crafted 16th-century building.

The brahma samba is lactated in the east direction of the temple, which stands about 18 feet tall with a 2 foot radius at its foundation.

The complex includes many prominent sculptures and decorative features. Near the tall tower over the entrance gate, an impressive pillar (kambha or nandi) stands (gopura). The tower itself is decorated with well-sculpted depictions of Hindu gods and goddesses. The open mantapa is made up of 48 pillars with frieze carvings of divinities. The navagraha temple (shrine for the nine planets) is to the north, with twelve pillars, each depicting a saint (rishi). Sculptures of two “door keepers” flank the entrance to the sanctum.

Sculptures depicting King Ravana raising Mount Kailash in an effort to please the god Shiva, Durga killing Mahishasura (a demon), images of the Nayanmar saints (Tamil Shaivaite saints), depictions of the Girija Kalyana (marriage of Parvati to the god Shiva), and the saptarishis are among the other prominent works of art (seven sages of Hindu lore). Recent excavations at the temple site have revealed the presence of a 1200-year-old temple tank (kalyani). 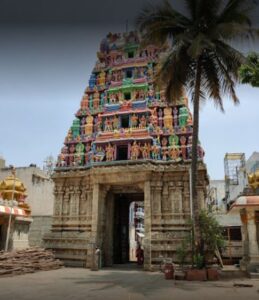 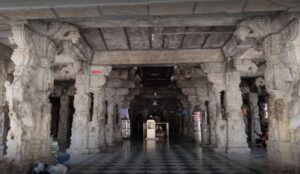 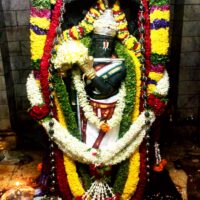 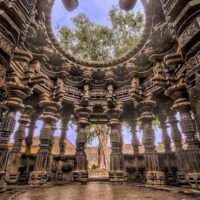