Offerings to Lord Hanuman are sold in the temple, such as the popular sweet “besan ke ladoo,” which devotees enjoy; the idol is also adorned with a lovely marigold flower garland. This temple is notable for having Lord Hanuman facing his Lord, Rama, whom he worshiped with unwavering and selfless devotion. 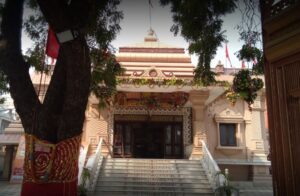 The sankat mochan varanasi temple is said to have been built on the site where Tulsidas had a vision of Hanuman. Tulsidas, the author of the Ramacharitamanasa, the greatest version of Lord Ram story written in Avadhi (“Most of the people have confusion that Ramacharitamanasa is an avadhi version of Valmiki Ramayana but Ramacharitamanasa is different from Sanskrit Ramayana written by rishi Valmiki as Baba Tulsidas Ji already told in Ramacharitamanasa that “Nana bhanti Ram avatara, Ramayan sat koti apara” means that in each Kalp, Lord Ram takes Avatar and plays different two lilas (Acts), so we have different stories about the same Lord Ram.” Regular visitors to the temple, according to legend, will gain the special favor of Lord Hanuman. Every Tuesday and Saturday, tens of thousands of people form a line in front of the temple to pray to Lord Hanuman. According to Vedic Astrology, Hanuman protects humans from the wrath of the planet Shani (Saturn), and those with an ill-placed Saturn in their horoscopes should visit this temple for astrological remedies. 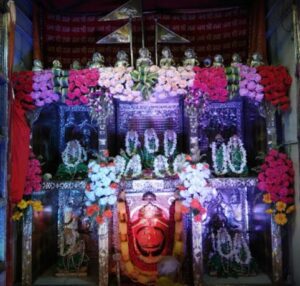 This is said to be the most effective method of appeasing Shani. While it is suggested that Hanuman did not hesitate to engulf the sun, the lord of all planets, in his mouth, which humbled all the gods and angels, forcing them to worship him in exchange for the Sun’s release. Some astrologers believe that worshiping Hanuman can counteract the negative effects of Mangal (Mars) and virtually any other planet that has a negative impact on human life.

Every year in April, the temple hosts a classical music and dance concert festival called “Sankat Mochan Sangeet Samaroh,” which attracts musicians and performers from all over India. The first festival was held 88 years ago, and it has since invited musicians and dancers, including Odissi guru Kelucharan Mahapatra, who has been involved since its inception. In fact, along with Sanjukta Panigrahi, Swapna Sundari, and Kankana Banerjee, he was instrumental in establishing women’s participation in the festival.

Via Road : You can get to the temple by hiring a car or taking an auto rickshaw. Sankat Mochan Temple is about 11 kilometers from Varanasi’s railway station, the same distance from the roadways bus stand, and 3 kilometers from BHU.

Via  Rail : You can take an auto rickshaw to Sankat Mochan directly from the Banaras railway station or the roadways bus stand for Rs 15 and 45 minutes.

Via Air : The Temple is accessible via the nearby Lal Bahadur Shastri International Airport, which has regular domestic flights to Delhi and Mumbai. 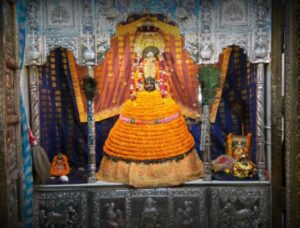 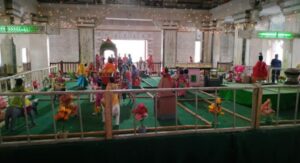 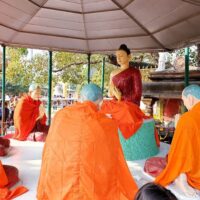 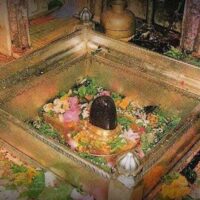 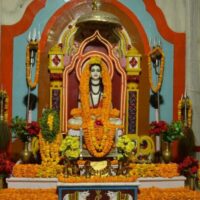