Sri Varaha Lakshmi Narasimha temple, Simhachalam is a Hindu temple in Visakhapatnam, Andhra Pradesh, India, located atop the Simhachalam Hill Range, 300 metres above sea level. It is devoted to Vishnu, who is known as Varaha Narasimha and is worshipped there. According to tradition, Vishnu emerged in this form (lion’s head and human body) after protecting his devotee Prahlada from his father Hiranyakashipu’s death attempt. Throughout the year, except on Akshaya Tritiya, the idol of Varaha Narasimha is covered in sandalwood paste, giving it the appearance of a linga. Simhachalam is one of Andhra Pradesh’s 32 Narasimha temples, which are prominent pilgrimage sites.

The mythical history of the Temple’s foundation is documented in the local Sthala purana, and it is linked to the well-known story of the demon King Hiranya-Kasyapa and his son Prahlada. Hiranyakashipu and Hiranyaksha are brothers and powerful demon lords intent on upsetting the world’s tranquilly.

Hiranyaksha captured the earth and dragged it to the farthest reaches of the universe. By taking on the form of a boar, Lord Vishnu was able to kill him and free the land from the demon’s grip (Varaha Avatara). Hiranyakasipu wished to revenge his brother Hiranyaksha’s death. He desired to become immortal, so he underwent tapasya (austerities) to appease Lord Brahma. However, Lord Brahma stated that this was not feasible, therefore Hiranyakasipu requested that Lord Brahma grant him a boon that he could not be slain by any animal or man, at any time of day or night, with any weapon, in the sky or on the ground. Hiranyakasipu desired to be worshipped by the entire world.He added the power of penance to his prowess and began punishing Lord Vishnu’s worshippers, the gods and sages.

Prahalada, Hiranyakasipu’s son, was a Vishnu devotee from the moment he was born, and hence incurred his father’s wrath. Hiranyakasipu attempted to change his son’s behaviour, but when he found him stubborn, he subjected him to great suffering. He had elephants tramp over him and venomous snakes slithering around him. Hiranyakasipu, who was shielded by divine grace, requested his attendants to toss his son into the sea and place a big mountain over him as a final option. Prahalada was dropped in the water near Mount Simhadri by his servant with the intention of placing the mountain over him.But, before they could finish their act, Lord Narayana came to his rescue, leaping over the hill and pulling Prahalada from the sea. As a result, Simhadri is the location where the Lord saved Prahalada.

Prahalada, according to the Stalapurana, was the first to build a temple around the Deity. After his father’s death at the hands of Narasimha, he was able to do this. The temple, however, was neglected and began to crumble near the conclusion of that life-cycle (Krita yuga). Even the Deity was not spared, as earthen crests gradually accumulated around the figure.

The temple’s actual antiquity is unknown, although it has an inscription from the Chola monarch Kulottunga-I, who conquered the Kalinga regions in 1098-99 A.D., indicating that it must have been a significant site even at that time. A queen of the Velanadu lord Gonka III (1137-56) decorated the picture with gold, according to another inscription, and the Eastern Ganga ruler Narasimha.

In the later half of the 13th century, I built the central shrine, the mukha mandapam, the natya mandap, and the enclosing verandah in black stone, and other grants inscribed on its walls (the Government Epigraphist’s lists for 1899 list at least 125 such inscriptions) make it a regular repository of the district’s history.

Sri Krishna Devaraya of the Vijayanagara empire inscribed inscriptions at the Simhachalam temple recalling his victories and detailing how he and his queen gave the yod with a necklace of 991 pearls and other valuable gifts.

An indulgent preparation of sandal paste is used to keep the deity covered. This sandal paste will be removed once a year, on Akshaya tritiya day (3rd day of Vaishakha Masam), in a ceremony during the Chandan Yatra (Chandanotsavam) festival, and devotees will be given Nija roopa darshanam of Swamy Varu. It is the temple’s most important festival.

Accommodation is available near the temple. A/c and Non A/c rooms are available starting with Rs. 250 and end with Rs. 900.

How to Go Simhachalam Temple: Both locals and tourists can easily access the Simhachalam Temple in Visakhapatnam. The temple, which is approximately 20 kilometres from the city centre, provides a number of transportation alternatives for your convenience.

simhachalam temple how many steps: The front gate has roughly 40/46 steps with railings for support. The temple is easily accessible to senior citizens in good physical condition. 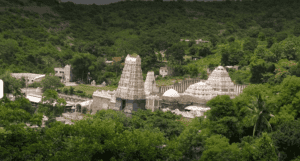 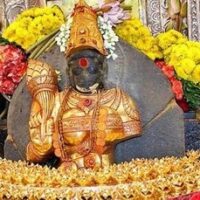