After defeating Ravana and returning from Sri Lanka, Lord Sri Rama desires to do pooja to Lord Siva at Rameswaram in order to atone for his guilt. Maharshi Vasishta, Rama’s Kula Guru, arranges a muhurtham for the sivalingam’s installation.Rama assigns Hanuman the duty of obtaining a sivalingam from Kasi for this goal.

Rama instructs Hanuma to go to Kasi, where she selects a sivalingam that is a huge, magnificent white. He keeps the lingam within a chikkam and sets off to return to Rameswaram (nest of threads). On his way back, he stops in this community to carry out his early-morning Sun worship (the so-called sandhyavandanam or suryopasana). He keeps the chikkam here as he does arghya tarpana and all other forms of Sun worship. After returning after pooja, he tries to hoist the lingam, but finds that it has already been installed there—at the exact muhurtham that Vasishta had requested Rama set the lingam at Rameswaram.

Hanuman asks Kasi for a different lingam since he is aware that, despite his greatest efforts, he will never be able to lift the lingam free of the ground. As the muhurtham to instal the lingam draws near, Rama gives Sita the order to make a saikata lingam (a lingam composed of sand), instals it, and finish his worship. The devotion had already been finished when Hanuman arrived with the new sivalingam at Rameswaram, so he himself set it up.

The Lord Siva and the chikkam were both erected here, giving rise to the name Sivadevuni chikkala for this location.

This entire region was covered in a forest a few hundred years ago. When they dug here with an iron rod, the farmers found blood oozing from the ground. They found this white sivalingam in the ground after carefully excavating a bit more. The Mogalturu king was immediately alerted by the shocked farmers. The monarch gave his slaves orders to keep digging until they found the lingam’s root, then to remove and replace it. Due to their failure, the king acknowledged the lord as his mahatyam, constructed a temple, and instituted regular pooja.

On the temple grounds, a lot of devotees who want children plant coconut trees. Their wish is said to come true a year after the tree is planted.

The Lord Shiva temple is next to the Parvati temple, which faces south. A Lakshmi Narayana temple is located inside the same complex. Behind this temple lies a large, beautiful lake.

During the Sivaratri season, this location receives hordes of pilgrims.The temple organises laksha bilvarchana for Karthika Masam (worshipping with one lakh bilva leaves). Chandi Yagam, Laksha Kunkumarchana, and Sivaratri Radhotsavam are just a few of the annual celebrations that take place here. 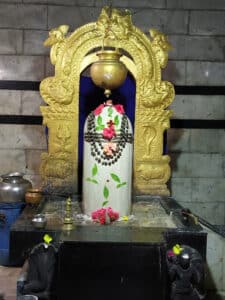 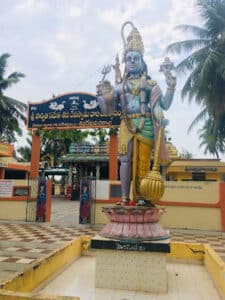