The Undavalli Caves are situated 6 km south-west of Vijayawada, 22 km north-east of Andhra Pradesh ‘s city of Guntur.The Undavalli Caves Vijayawada, a monolithic example of Indian rock-cut architecture and one of the finest testimonials to ancient viswakarma sthapathis, is situated in the Andhra Pradesh Indian state of Undavalli, Guntur district. It is one of the national monuments which is centrally protected.

These Undavalli Caves Vijayawada are reported to find themselves in the 7th century. But one can see rock-cut style Gupta Architecture that goes back to the 4th-5th century AD.

Everyday timings of Undavalli Caves are 9 am to 5.30 pm.

The Undavalli Caves Ticket Prices for entrance  is Rs. 5  per person.

Most of the emperors of Gupta were vaishnav, so we can see many of the Narsimha, Lord Vishnu, and Ramayan Stories sculptures. They are identified with the 420-620 CE Vishnu Kundi kings. Anantha Padmanabha and Lord Narashimha are devoted to these Undavalli Caves .

In the 4th to 5th centuries CE, these Undavalli Caves Vijayawada were carved from solid sandstone on a hillside. There are many caves and the best-known largest one has four storeys with a massive recreated statue of Vishnu in a reclining pose, sculpted from a single block of granite within the second storey. In Andhra, many Buddhist artefacts and stupas were transformed into Hindu temples and deities and undavalli

It was originally a Hindu cave that resembled the Udayagiri and Khandagiri architecture. It is estimated that during the reign of King Vishnukundi, these  Undavalli Caves were excavated sometime in the 4th-5th CE. One of the earliest examples of Gupta architecture is the largest cave, mostly primitive rock-cut cells of monasteries carved into the sandstone hills.

The  Undavalli Caves  were originally formed as a Jain residence, and the first-floor residence still retains Jain style; the vihara exhibits Jain monastics and contains tirthankara sculptures. This cave’s first level is a carved vihara and includes Buddhist artwork. During ancient times, the site served as the monastic complex of Bhikkhu.The caves’ walls depict sculptures carved by skilled artisans.

The Undavalli Caves Vijayawada are surrounded by farmland with greenery. Many strong examples of rock-cut architecture can be seen from the high hill above the cave overlooking the Krishna river.

It is an impressive four-storey rock-cut temple with a 29 m long, 16 m wide facade facing east. Every floor has an in depth variable. With 8 pillars and 7 door openings on the façade, the ground floor is an unfinished low pillared space. The first floor is dedicated to the Trinity (Siva, Vishnu, and Brahma), each with the pillared hall in front.

Sculptures representing Vaishnava deities on the walls. The pillared rectangular sanctuary of Lord Vishnu on a serpent is on the second level. Shiva and Vaishnava sculptures and a few close to the Vaishnava Alwars are later sculptured. The top floor of the Triple Shrine was unfinished. Some sculptural specimens are credited to the time of Chalukyan.It has a 5-metre-long Lord Buddha statue in a reclining pose. 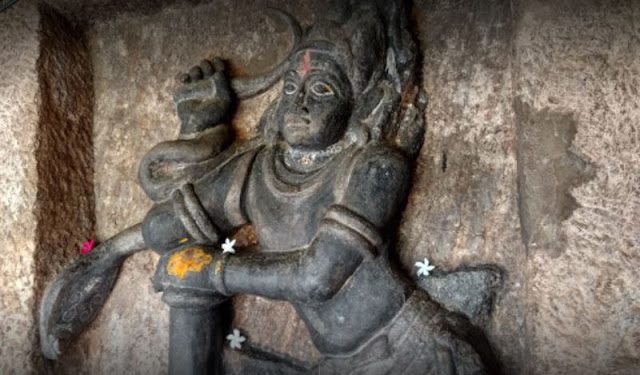 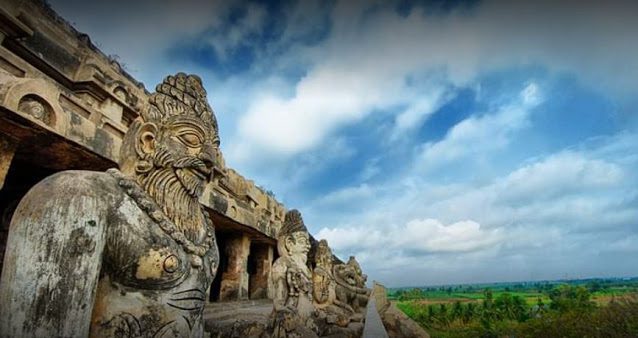 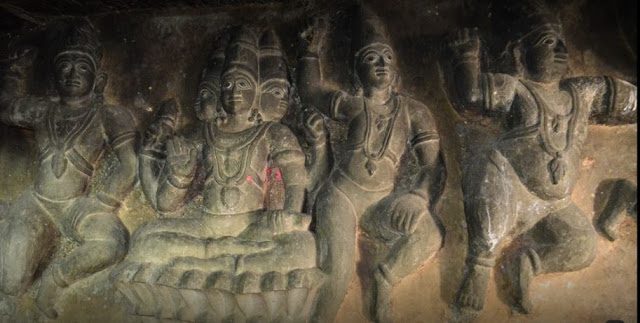