Guruvayur Temple is a Hindu temple dedicated to Lord Guruvayurappan (Lord Vishnu’s four-armed avatar), and is located in Guruvayur, Kerala, India. It is known as Bhuloka Vaikunta and is one of the most prominent Hindu pilgrimage sites in Kerala (Holy Abode of Vishnu on Earth)

Guruvayurappan is the presiding deity of the Guruvayur Temple (Vishnu, worshipped in the form of his avatar Krishna). A four-armed standing Vishnu holds the conch Panchajanya, the discus Sudarshana Chakra, the mace Kaumodaki, and a lotus with a Holy basil garland in the centre of the image. The glorious appearance of Vishnu as shown to Krishna’s parents Vasudeva and Devaki at the time of Krishna’s birth is depicted in this artwork. Worship follows Adi Shankara’s practises, which were later formalised by Chennas Narayanan Nambudiri in the Tantric method, an inter-religious spiritual movement that originated in mediaeval India (born in 1427).

The Guruvayoor Temple is run by a special Guruvayoor Devaswom (Guruvayur Devaswom), which is overseen by the Kerala government. The main festivals of this Guruvayoor Temple include the 10-day festival in the Malayalam month of Kumbham, which begins with flag hoisting on the Pooyam star, Shri Krishna Janmashtami (Lord Krishna’s Birthday) in the month of Chingam, Ekadasi (11th day) in the shukla paksha (bright fortnight) in the month of Vrischikam, also known as Guruvayur Ekadasi, and Vishu.Ganapathi, Ayyappan, and Bhagavathi are the temple’s sub-deities, and each has two sub-temples adjacent, one for Ganapathi and the other for Naga Devatha. Uttara Guruvayurappan Temple at Mayur Vihar, Delhi, is one of its duplicate temples. The Guruvayoor Temple is dedicated to Shri Guruvayoor Krishna, who is known as Guruvayurappan, the deity of the well-known Shri Guruvayur Krishna Temple in Guruvayur, Kerala. Malayalis and Tamils in Delhi revere this shrine the greatest.

According to tradition, Janamejaya sacrificed all of the world’s snakes, including Takshaka, who was responsible for his father Parikshit’s death. Hundreds of thousands of snakes were slain when they fell into the sacrificial fire, but the ceremony was interrupted before Takshaka was murdered by a Brahmin named Astika.

Janamejaya contracted leprosy as a result of his role in the deaths of millions of snakes. He had given up hope of finding a cure. One day, Sage Atreya (son of Atri) appeared before Janamejaya and advised him to seek sanctuary at Guruvayur under Krishna’s feet. Atreya told him that Shri Hari’s effulgence is at its peak in Guruvayur’s temple, and Vishnu bestows his blessings on all worshippers. He rushed there right away and spent the next ten months worshipping Guruvayur’s god.He returned home healthy after ten months and confronted the astrologer for delivering a bogus prognosis. He would notice a snakebite mark on his left leg, according to the astrologer. He had only spared death because he was in a temple at the time where Anantha (the emperor of serpents) was present, and Anantha was the God’s brother in Guruvayur, where he had completed his worship.

At Guruvayur, the monarch chose to construct a full-fledged temple. During the days when Kerala was controlled by the Perumals, this temple was degraded and reduced to poverty. The Perumal emperors were predominantly Shaivites who did not support Vaishnavite shrines. Their sponsorship was extended to the Shiva temple in Mammiyur, and as the royal patronage shifted, so did the devotees.As a result, the Guruvayur temple was reduced to utter poverty. A holy man, on the other hand, went to the Mammiyur temple for food and lodging one night. Despite the temple’s wealth, the temple authorities pretended they didn’t have anything and pointed him to the nearby Guruvayur temple. When the holy man reached the temple grounds, he was greeted politely by a Brahmin kid and lavishly fed. The holy man was overjoyed, and he bestowed a blessing. According to mythology, the fortunes of Mammiyur Siva temple began to deteriorate, while those of Guruvayur Vishnu temple improved.

The Tamil literature “Kokasandesam” refers to a place called “Kuruvayur” in the 14th century, and there are several references to Kuruvayur in the 16th century (fifty years after Narayaniyam was composed). Kuruvai means “sea” in Old Tamil, hence the village on the Malabar Coast could be called Kuruvayur.

The first temple records originate from the seventeenth century. The first reference of Kerala’s numerous major Vishnu temples can be found in the songs of Alwars, Tamil saints whose timeline is unknown. Guruvayur, on the other hand, had become Kerala’s most popular pilgrimage centre by the end of the 16th century.

Guruvayur was destroyed by the Dutch in 1716. Treasures were looted, and the Western Gopuram was set on fire (later rebuilt in 1747). The Dutch demolished the Trikkunavay temple in 1755, forcing the Brahmins to flee.

Hyder Ali of Mysore conquered Kozhikkode (Calicut) and Guruvayur in 1766. To save the temple, he demanded a ransom of 10,000 fanams. The ransom was paid, but pilgrims withdrew due to insecurity. Hyder Ali gave a Devadaya to save the temple at the request of the Malabar Governor, Shrnivasa Rao. Tippu Sultan attacked the area later, in 1789 AD. Tippu set fire to the Temple and damaged the minor shrines, but it was saved owing to opportune rain. In 1792, Tippu was defeated by Travancore and the English. On September 17, 1792, the idol was reinstalled after being concealed underground in anticipation of the Tippu’s invasion.

From 1825 through 1900, the Ullanad Panikkars rescued and cared for the shrine. The Chuttambalam, Vilakkumatam, Koottambalam, and Sasta shrine were rebuilt and roofed with copper sheets between 1859 and 1892. In 1900, the temple’s administrator, Konti Menon, set the worship hours and led the effort to keep the temple clean. He restored Pattaya Pura and installed the huge bell (granary). Guruvayur was administered by Kozhikode once more in 1928.

A major fire broke out in the temple on November 30, 1970, consuming the entire chuttambalam and the entire Vilakkumatam on the west, south, and north sides.

Rudratheertham is the name of the temple tank (pond) on the temple’s northern side. Lord Shiva is said to have bathed on the southern bank of this pond for thousands of years. Because Shiva is also known as ‘Rudra,’ the pond was given the name Rudratheertham.

Guruvayur Temple Darshan Online Booking : The Lord Guruvayoorappa can be seen through the virtual queue. One day will be allowed for up to 600 people who have made advance online bookings. Hours of operation are from 9.30 a.m. to 1.30 p.m. After a two-and-a-half-month hiatus, devotees can return to Guruvayoor on Tuesday. The Virtual Queue system enables devotees to see the Lord. The decision follows the announcement of the Covid Lock Down concession.

Guruvayoor Temple Website https://guruvayurdevaswom.in/ allows you to book a free online darshan. Bookers will receive a token email with a QR code that records the scheduled time and date. 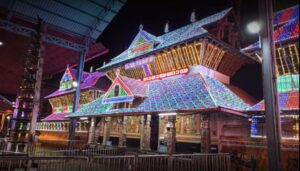 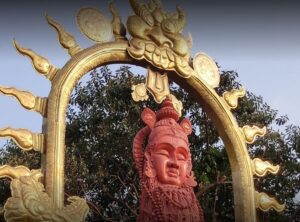 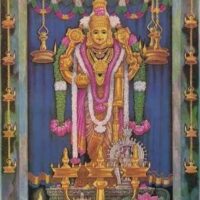 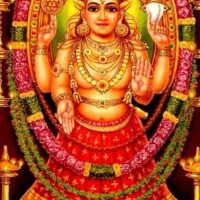 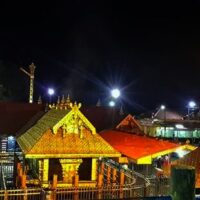