Sri Ardhagiri Anjaneya Swamy Temple is located in Aragonda(v), Thavanampalle(M), Chittoor(Dt), which is very famous for curing skin diseases with the holy water of Sanjeevaraya Pushkarini. This Ardhagiri Temple was built a long time ago and the Idol of Sri Veeranjaneya Swamy was installed. The unique specialty of this idol is that the face of Sri Veeranjaneyaswamy is looking northward.

The Ardhagiri Anjaneya Swamy Temple is very ancient and has now become one of the most important and popular pilgrim centres in the Chittoor district of Tirumala, Kalahasti and Kanipakam. Approximately 1000 to 1500 devotees visit the Ardhagiri Temple every day and it will increase to about 15,000 to 20,000 devotees in the days of Pournami (full moon day).

The name Ardhagiri came from an incident related to Treta Yuga, when Lord Hanuman was transporting Dronagiri Mountain (a mountain consisting of herbs for life) during the night, Bharat brother of Lord Ram thought that some mountain was going to hurt; he instantly shot an arrow at Hanuman.Due to its influence, half of the mountain fell to this location, and hence the name of Ardhagiri. It means Half Mountain (Ardhra = half, giri = mountain) in the local language. From then on, people began worshipping Hanuman in the name of Veera Anjaneya Swamy.

Many people, until now, have come from all over the world to catch the medicated water in the reservoir, in addition to the Ardhagiri Anjaneya Swamy Temple. Mountain clay has many healing properties and has the ability to heal many forms of skin problems. The water in the pond comes from various parts of the mountain, affecting several roots of medicinal plants. 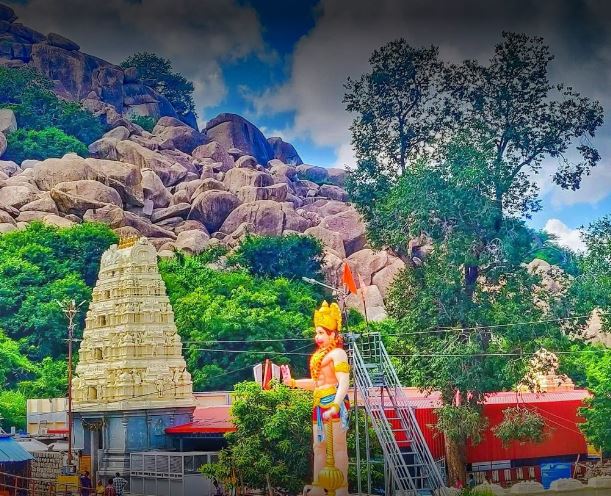