Ryali Temple is located 40 Km from Rajahmundry, 74 Km from Kakinada and 34 Km from Amalapuram and is situated between the rivers Vashista and Gautami, the tributaries of the River Godavari, the location of the renowned JaganMohini Kesava Swamy Temple. The exquisite statue, made of black stone depicting Maha Vishnu and Mohini on its front and back sides, is a real masterpiece of sculptural dexterity.

According to the legend “Bhagavatam,” when Devatas and Rakshas were quarrelling over the sharing of the holy Divine nectar “Sree Maha Vishnu” came to the rescue of Devatas in the form of Mohini and persuaded both rivalry parties that promised to distribute the holy Divine nectar equally to Devatas and Rakshas.But for the sake of universal harmony and the wellbeing of the wise, holy and sacred nectar was distributed to the Devatas alone, and the Mohini vanished.

Lord Siva, seeing the most fascinating beauty of Mohini, attracted her. He pursued her for a while in the presence of his consort Parvathi Devi, it is a common belief that the holy incident was the result of the birth of “AYYAPPA SWAMY.” One flower from the clay of Mohini fell, and Lord Shiva smelled it.Instead, unexpectedly, he found “Sree Maha Vishnu” in the form of Mohini and felt embarrassed about his actions. The place where the flower of Mohini fell is called RYALI, the Telugu meaning “Dropping.”

This Ryali village was part of the wild forest throughout the 11th century, and these areas were under the control of Chola Rajas. Sri Raja Vikrama Deva, who ruled these parts during those days, came to this hunting spot. After he had been tired of killing wild animals, he took a break under the shade of a big ponna tree and fell into deep sleep and had a dream.Lord Sri Maha Vishnu appeared in his dream and informed that his sanctuary was located in the basement of this area and directed the “Raja to get the wooden chariot pull in the area and where the nail of the chariot fell, the sanctuary can be found in the basement of that place.

Raja did so, and the land where the nail of the chariot had fallen had been excavated and found an idol that made the vision of Raja real. During the 11th century, he built a small temple and organized worship during his rule. Gradually prakarams were built in 1936 (Data nama Samvatsara) and renovated.The shrine of Sri jaganmohini kesava Swamy varu is Salagrama Ekasila with a height of 5 feet and a width of 3 feet. 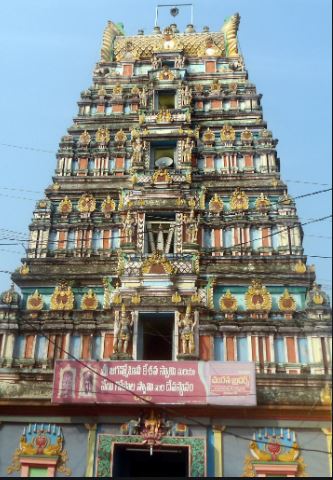