The Nellore Ranganathaswamy Temple, Andhra Pradesh, India is a Hindu temple devoted to Lord Ranganatha, Lord Vishnu’s sleeping form. This temple is one of the oldest temples in Nellore, also called the Talpagiri Ranganathaswamy temple or the Ranganayaka Swamy Temple.

Sri Ranganatha swamy Temple was founded in the 7th century by kings of Pallava. King Raja Mahendra Varma later created the temple in the 12th century. It is situated on the banks of the river Penna . A huge tower, called Gaaligopuram, which literally means “wind tower” is just before the primary door to the temple.

This tower is about 70 feet high and is surrounded by 10 feet of gold-plated ships, called kalashams. A grand festival is held each year during the month of March – April (which varies according to the Indian calendar). These are known as Brahmotsavam.

The Ranganayaka Swamy Temple also has a mirror house that is the devotees ‘ main attraction. There is a distinct Goddess Rajya Lakshmi Devi shrine facing south of Goddess Andal Ammavari’s primary temple and shrine facing north.

According to the legend, Lord Vishnu and his wife Goddess Sridevi chose to visit Bhoo-Loka. He told Adisesha to be the place to remain at Bhoo -Loka as Lord’s residence. According to the Lord’s order, at this location, Adisesha took the form of a hill. The location is therefore known as the Kshethra Talpagiri.

A grand festival is held each year during the month of March – April (which varies according to the Indian calendar). These are known as Brahmotsavam. 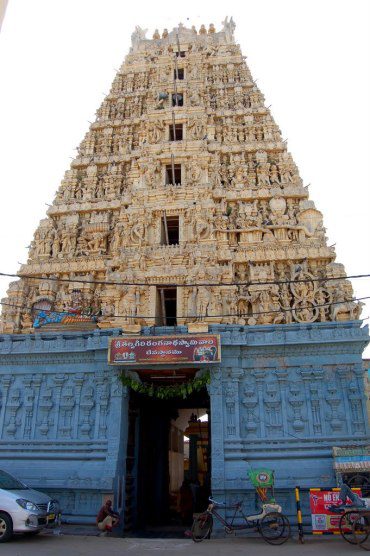