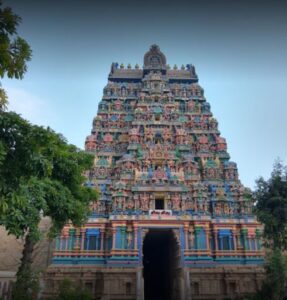 Thiruvanaikal is one of Tamil Nadu’s five major Shiva temples (Pancha Bhoota Stalam), each representing one of the Mahbhta or five great elements; this temple represents water, or neer in Tamil. Despite pumping water out, the sanctum of Jambukeswara has an underground water stream that is still full of water.

Jambukeshwara Temple is one of the 275 Paadal Petra Sthalams, and it is here that the deity’s praises have been sung by all four of the most revered Nayanars (Saivite Saints). Inscriptions from the Chola era can be found in the temple.

Parvati once made fun of Shiva’s penance for the betterment of the world. Shiva decided to punish her for her actions and instructed her to perform penance on the earth from Kailasam (Shiva’s abode). As per Shiva’s wish, Parvathi took the form of Akilandeswari and went to the Jambu forest (Thiruvanaikoil) to perform her penance. She began her worship by making a lingam out of river Cauvery (also known as river Ponni) water under the Venn Naaval tree (the Venn Naaval tree on top of the saint Jambu). Appu Lingam is the name of the lingam (Water Lingam). Siva finally gave Akilandeswari darshan and taught her Siva Gnana. Akilandeswari got Upadesa (lessons) from Shiva, who was facing west. 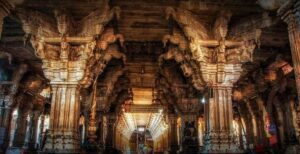 ‘Malyavan’ and ‘Pushpadanta’ were two Siva Ganas (Siva’s disciples) who lived in Kailash. Despite the fact that they are Siva Ganas, they constantly clash and quarrel with one another. ‘Malyavan’ cursed ‘Pushpadanta’ to become an elephant on earth in one battle, while the latter cursed the former to become a spider on earth in another. The elephant and the spider arrived in Jambukeswaram and began to worship Siva. Every day, the elephant gathered water from the Cauvery River and performed ablution at the lingam beneath the Jambu tree (Eugenia jambolana, the rose-apple tree).To avoid dry leaves from falling on the lingam and direct sunlight from falling on it, the spider built a web over it. When the elephant first saw the web, he mistook it for dust on the lingam. The elephant ripped them up and poured water on the lingam, and the ritual was repeated every day. When the spider became enraged, it crawled into the elephant’s trunk and bit the elephant to death, killing itself in the process. Siva, in the form of Jambukeswara, was moved by the two’s deep devotion and lifted the curse from them.This place became known as Thiru Aanai Kaa (thiru means sacred, aanai means elephant, and kaa (kaadu) means forest) because an elephant worshipped Siva here. ‘Thiruaanaikaa’ was later shortened to ‘Thiruvanaikaval’ and ‘Thiruvanaikoil.’

As a result of killing the elephant, the spider was reborn as King Kochengot Chola (kotchengannan cholan means red-eyed king) and founded 70 temples, one of which is this one. The Chola built seventy temples in addition to this temple, according to Nalayira Divya Prabandham. He constructed the Siva Sannathi (sanctorum) so that not even a small elephant could enter, remembering his previous birth’s animosity with elephants. The entrance to Jambukeswara’s sanctorum is only 4 feet high and 2.5 feet wide. 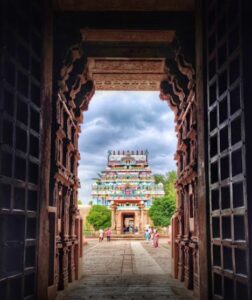 The king’s red eyes had a story: when he was still in his mother’s womb, the palace astrologer expected a sacred time to give birth in order to ensure the newborn’s well-being. The queen went into labor earlier than the astrologer had predicted. As a result, the queen instructed the servant to hang her upside down for the time being in order for her to have a wise and noble son who could lead the kingdom properly. The baby’s eyes turned red as he waited inside the womb. After becoming king, he constructed the Aanaikka (elephant protected) temple for Siva and Goddess Akilandeswari, which was later renamed Thiruvanaikovil.

The five Shiva temples known as Pancha Bhoota Stalam reflect the manifestation of the five primary elements of nature: space, air, fire, water, and earth. Pancha denotes five, Bhoota denotes components, and Sthala denotes place. All of these temples can be found in South India, with four in Tamil Nadu and one in Andhra Pradesh. The five elements are said to be enshrined in the five lingams, and each of the lingams in the temple representing Shiva has five different names depending on the elements they represent. Shiva is said to have manifested himself in the form of water in the temple (Appu Lingam).Prithivi Lingam (representing land) at Ekambareswarar Temple, Akasa Lingam (representing sky) at Thillai Nataraja Temple in Chidambaram, Agni Lingam (representing fire) at Annamalaiyar Temple, and Vayu Lingam (representing air) at Srikalahasti Temple are the other four manifestations. 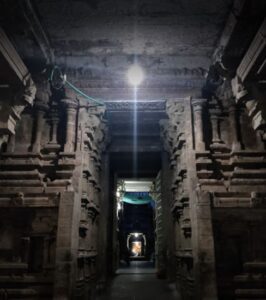 Via Air :The nearest airport is Trichy (Tiruchirapalli), which is 15 kilometers away. From the airport to the temple, local transportation is convenient.

Via Rail :The closest railway station is Trichy Junction, which is 8 kilometers from the temple.