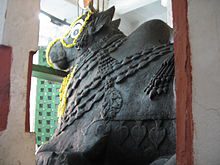 The bull is a sacred Hindu demi-god, known as Nandi; Nandi is Shiva’s near devotee and guardian. It is said that Dodda Basavana Gudi is Nandi’s largest temple in the globe. Nandi’s stone monolith idol is continuously coated with fresh butter layers, benne in Kannada’s local language. The elephant-headed Hindu deity Ganesha is an idol nearby.

Every year on the last Monday and Tuesday of the Hindu month of Karthika Maasa a groundnut fair is held in the temple premises and groundnut is offered to the deity. This fair is known as ‘ Kadalekaayi Parishe ‘ in the local tongue. Groundnut sellers and devotees throng the place during Kadalekaayi Parishe.

Basavana Gudi is a regular place of visit for tourists and is covered by most of the tour operators including the Karnataka State Tourism Development Corporation.

Nandi Temple is for the worship of the sacred bull in Hinduism (Basava in Kannada), known as Nandi, the vahana of Lord Shiva. The word “nandi” in Sanskrit means “joyful.”

The Big Bull Temple was built in the architectural style of Vijayanagara in 1537 by Kempe Gowda, who also founded the town of Bangalore. The temple is named after the large Nandi granite monolith placed on a plinth in the temple shrine (garbhagriha) which has been blackened since years of charcoal and oil rubbing.

The temple is a small one, consisting of only the Vijayanagara-style shrine facing a porch. Built in the early 20th century, the current tower (vimana) above the shrine is adorned with Saivite figures and motifs. It’s said to house one of the world’s largest Nandi murtis. The murthi is about 15 ft (4.6 m) big and about 20 feet (6.1 m) long. 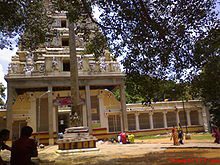 Big Bull Temple Timings: The temple stays open daily, including public holidays, from 6:00 AM to 8:00 PM.

The Bengaluru  Dodda Ganesha Temple is right next to the temple of Nandi Bull (Dodda Basavana Gudi). The temple attracts devotees from various Bangalore locations. The temple houses Lord Ganesha’s huge idol. What makes it more eye-catching and unique is the various kinds of ornaments that are made during the week. The butter bind (Benne Alankara) to the idol is one of the most popular ornaments. It takes more than 100 kg of butter (Benne) to apply to the Dodda Ganapathi. 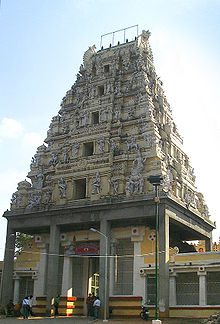 The garden of Bugle Rock is located behind the temple of Dodda Ganesha and adjacent to the temple of Bull. The garden gets its name from a bugle call made to alert the nearby dwellers on top of a very large rock formation.

It is densely covered with trees and a number of bats sitting on the trees can generally be seen and heard. There’s a water tank with patterns from Karnataka’s renowned individuals. 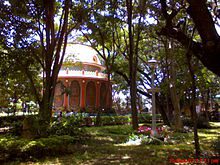 Bugle Rock Park Entry Fee: There is no entry fee.

Bugle Rock is a huge rock in South Bangalore’s Basavanagudi region, in the state of Karnataka. As the primary rock formation, it is an abrupt increase above the floor of triangular gneiss with an estimated era of about 3,000 million years.