Rameshwaram Temple is a Hindu temple dedicated to the god Shiva that is situated on the island of Rameswaram in the Indian state of Tamil Nadu. Rameshwaram Shiva Temple is also a Jyotirlinga temple, one of the twelve Jyotirlinga temples. It is one of the 274 Paadal Petra Sthalams, where Appar, Sundarar, and Tirugnana Sambandar, three of the most revered Nayanars (Saivite saints), have glorified the temple with their songs. Before crossing the bridge to Lanka, Rama founded and worshiped the presiding deity, the Lingam of Ramanathaswamy (Shiva). 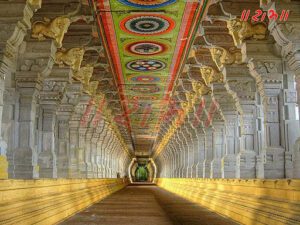 According to the Ramayana, Rama, the god Vishnu’s seventh incarnation, prayed to Shiva to forgive him for the sins he committed during his battle against King Ravana in Sri Lanka. Rama desired a big lingam in which to worship Shiva. He told Hanuman, his army’s lieutenant, to carry a lingam from the Himalayas. When Hanuman was late taking the lingam, Rama constructed a small lingam out of sand from the seashore, which is thought to be the lingam in the sanctum.

According to rameshwaram temple history, the Shiv Mahapuran, Brahma (the Hindu God of creation) and Vishnu (the Hindu God of salvation) once had a fight over creation’s dominance. Shiva pierced the three worlds as the jyotirlinga, a giant eternal pillar of light, to bring them to the test. To find the end of the light in either direction, Vishnu and Brahma split their paths downwards and upwards, respectively. Brahma claimed to have discovered the solution, though Vishnu admitted defeat. Brahma was cursed by Shiva, who appeared as a second pillar of light and told him that he would have no place in ceremonies when Vishnu would be worshipped forever. The jyotirlinga is the ultimate partless truth, from which Shiva appears in part.As a result, the jyothirlinga shrines are places where Shiva manifested himself as a fiery column of fire. There were originally thought to be 64 jyothirlingas, with 12 considered particularly auspicious and sacred. The presiding deity’s name is given to each of the twelve jyothirlinga locations, which are each considered to be a different manifestation of Shiva. The lingam representing the Stambha pillar is the primary image at all of these locations, symbolizing Shiva’s infinite existence (without beginning or end).Somnath in Gujarat, Mallikarjuna in Srisailam in Andhra Pradesh, Mahakaleswar in Ujjain in Madhya Pradesh, Omkareshwar in Madhya Pradesh, Kedarnath in Himalayas, Bhimashankar in Maharashtra, Viswanath in Varanasi in Uttar Pradesh, Triambakeshwar in Maharashtra, Vaidyanath in Deoghar in Jharkhand, The Jyothirlinga temple is the southernmost of the twelve Jyothirlinga temples. 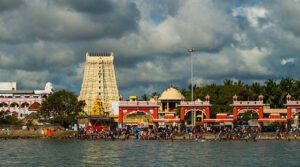 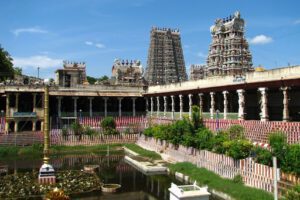 How to reach Ramanathaswamy Temple :

Via Air :The closest airport is in Madurai, which is approximately 174 kilometers from Rameswaram. Many Indian cities, like Chennai, Trichy, Bengaluru, and Mumbai, have flights to the airport.

Via Rail : The main railhead is the Rameswaram railway station. The station serves trains from Chennai, Madurai, Coimbatore, Trichy, Thanjavur, Palakkad, and Bengaluru. From the station, taxi services are available.

rameshwaram temple god: The Rameshwaram Temple is a Hindu temple dedicated to Shiva.